August 2019 — In recent decades, significant resources have been devoted to entrepreneurship, and studies find net annual job creation is positive only for startups (Economic Innovation Group, 2017; Conroy and Deller, 2015). As a result, growth potential of existing firms is sometimes overlooked. Expansions, existing firms adding jobs, create 75% of gross new employment (Figure 1). Existing firms, unlike startups, also generate job loss through layoffs when they contract or close. Unfortunately, job gains are often swamped by job losses resulting in net job losses by existing firms. In order for net job creation by existing firms to be positive, expansions would have to offset all losses from closures and contractions. New firms, on the other hand, can only create jobs, by definition. 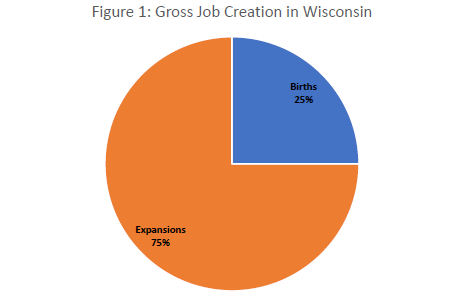 The importance of startups for net employment gains makes them central to job creation efforts. However, the overwhelming volume of gross jobs created by existing firms suggests these businesses are an important component of job growth as well. It is the combination of births and expansions which drives economic growth. Because much attention has been paid to startups and very little to expansions, in this WIndicator we investigate the impacts of firm expansions on Wisconsin’s economy.

In the U.S., 70% of gross job creation comes from established businesses. In Wisconsin, established businesses create three-quarters of new jobs (Figure 2), well above the national average. This indicates the state relies more heavily on mature establishments, relative to startups, for job creation and economic growth. It seems likely such patterns result from the
large presence of legacy industries like manufacturing. These industries have significant barriers to entry (e.g. capital expenses, etc.) resulting in fewer new businesses and larger overall firm
size. Additionally, investment in these firms is large enough they are likely to survive much longer than less capital-intensive firms because investors may be willing to accepts short-term losses in order to recoup their investments over a longer time period. 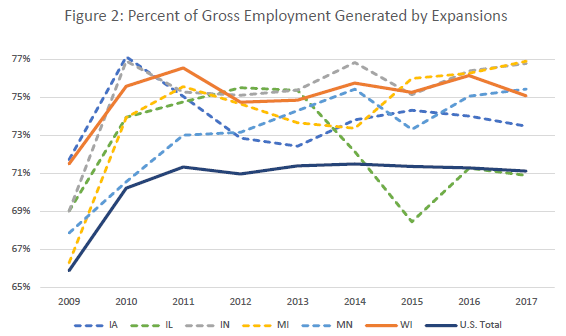 The share of employment generated by expansions has been relatively stable over time (Figure 2). During the recession, in Wisconsin it dipped to just over 70% but quickly recovered and has generally remained at or above 75%. Comparatively, the average U.S. state fared worse during the recession, when share of job creation from expansions dropped below two-thirds. In recent years, on average across the country, this measure recovered to a stable share just above 70%.

This highlights an important difference between Wisconsin and the U.S.: Wisconsin relies more on mature firms for job creation and less on startups. While this could be an advantage as older businesses generally provide better jobs (Litwin et al. 2013), it may raise some concern because existing businesses also destroy jobs. On an annual net basis, mature businesses create fewer jobs than they destroy each year. This is one reason so many policymakers have focused efforts on startups. Importantly, however, Figure 1 indicates each expansion, on average, creates about three times as many jobs as each startup. If policy can effectively enhance employment in existing firms, which is more stable, there is potential for robust, sustained economic growth.

In Wisconsin counties, the share of firms expanding each year varies widely (Figure 3). At the low end, northern counties saw about 21% of businesses expand. At the high end, roughly 30% chose to grow. In general, counties with highest expansion rates are clustered in the southeastern portion of Wisconsin. This is the most populous part of the state and home to its two largest cities (Milwaukee and Madison) in addition to presenting easy access to Chicago. Central Wisconsin counties, extending from St. Croix to Brown, also exhibit relatively high expansion rates, perhaps benefitting from proximity to the Twin Cities or access to key highway corridors including I-94, I-39, I-41, I-43 and Highway 29. 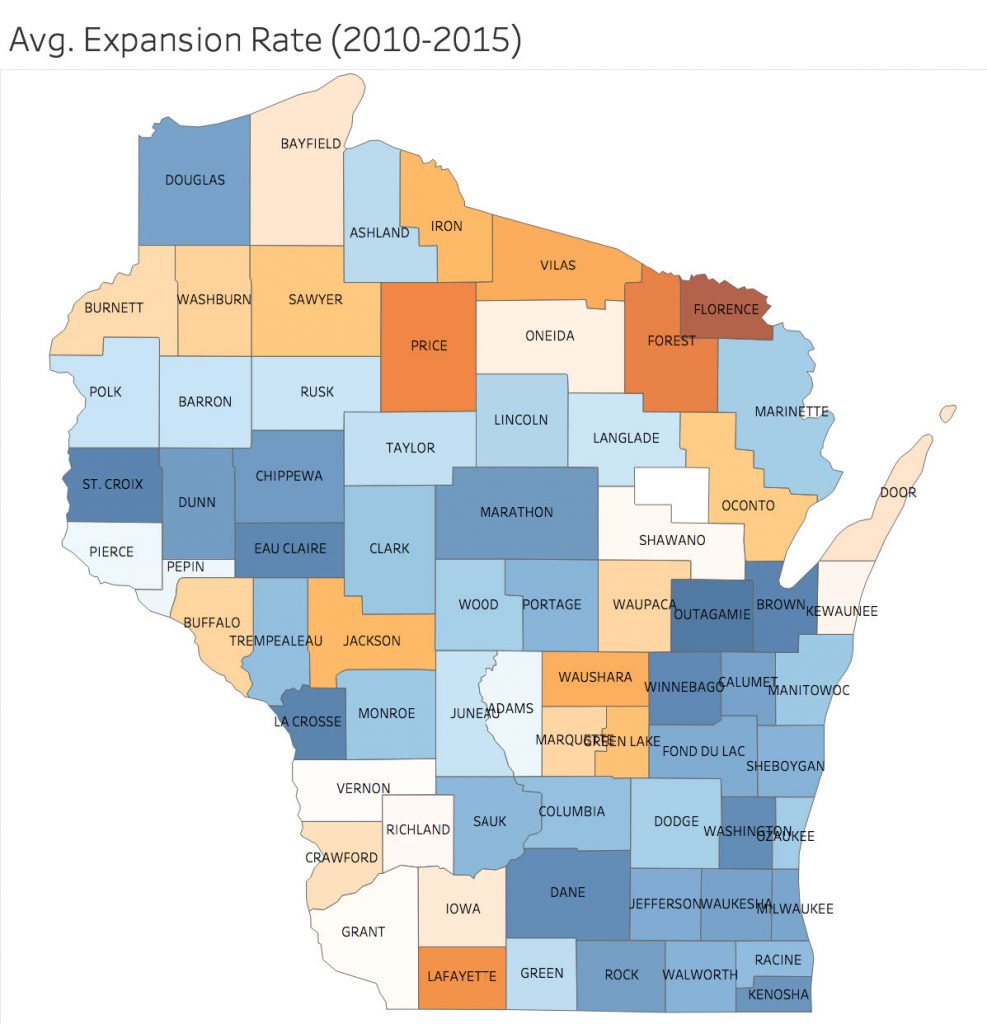 The number of jobs gained from each expansion varies in a manner similar to expansion rates (Figure 4). For leaner businesses, an expansion may mean hiring just one additional employee. On the other hand, for firms in large-scale industries like manufacturing, an expansion may involve hiring hundreds of new workers. On average in Wisconsin, each expansion adds approximately 5.5 jobs. By county, the number of jobs per expansion ranges from just under two to nearly seven employees. Most of these high-impact expansions are in the same counties with largest share of expanding establishments —Southeast Wisconsin and along key highway corridors. 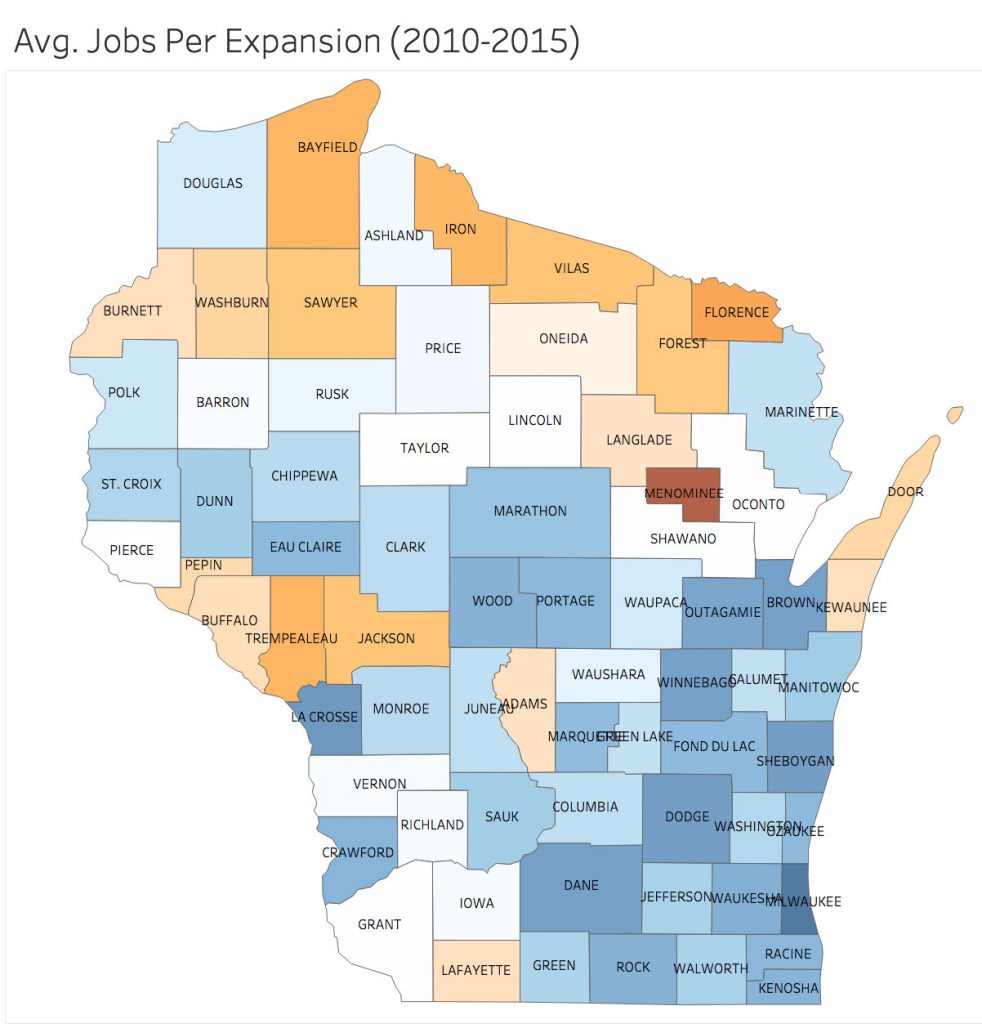 From a policy perspective, understanding which industries are responsible for the most expansions is useful for targeting efforts. In general, the retail trade sector was the most likely to see businesses expand in 2015 (Figure 5). In northern Wisconsin, perhaps due to tourism’s response to seasonal demand fluctuations, firms in the accommodation and food services sector were most likely to see growth. Manufacturing, construction, and health care (in that order) are the next most common sectors to expand, by county. 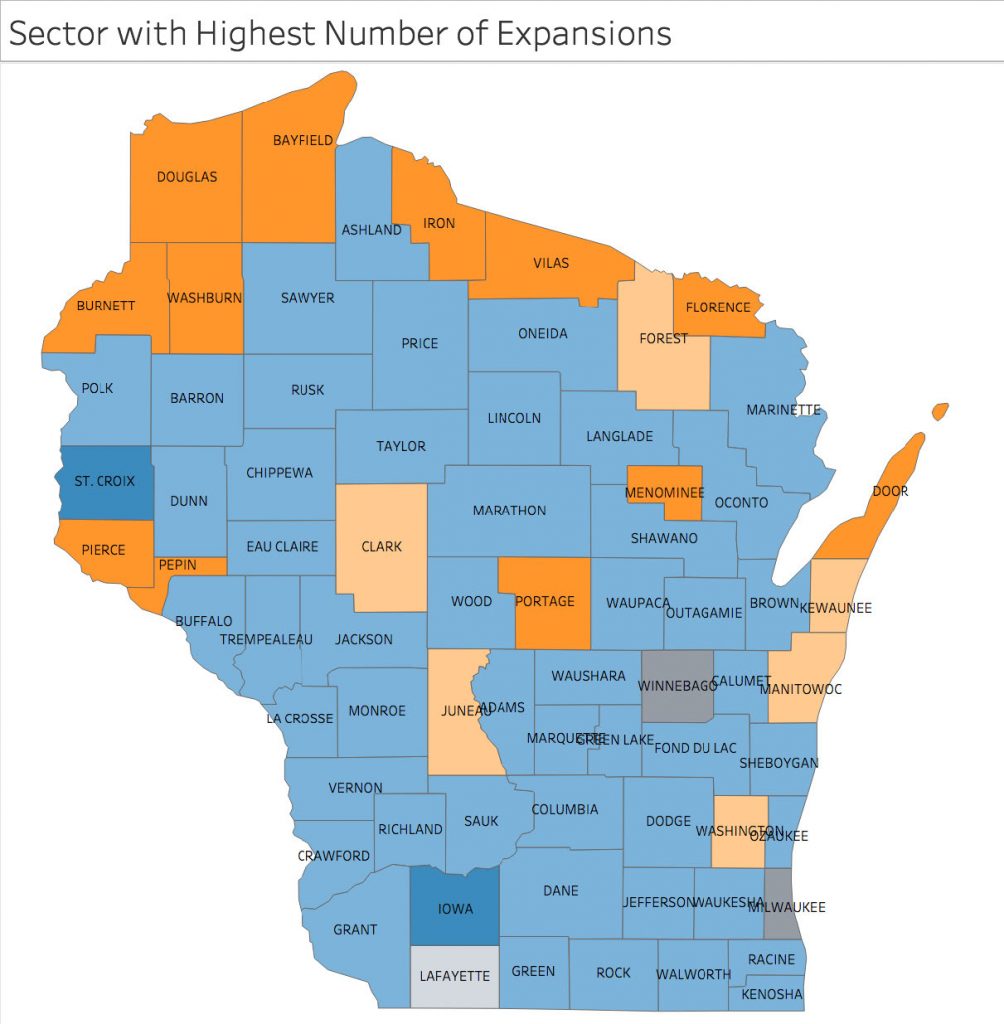 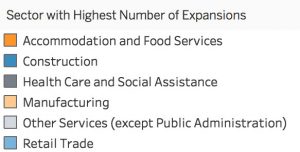 The following map of county-level expansions focuses on jobs in 2015 (Figure 6), the most recent year for which data is available. Rather than looking at which sectors have the most firms expanding, in this map focuses on which sectors generate the most employment through expansions. The results are very different from those shown above and highlight the fact that high expansion numbers do not necessarily equate to job growth. Large-scale industries like manufacturing and transportation and warehousing produce fewer expansions but each expansion comes with far more jobs. Retail trade, construction, and health care, however, are also producing a large number of jobs. 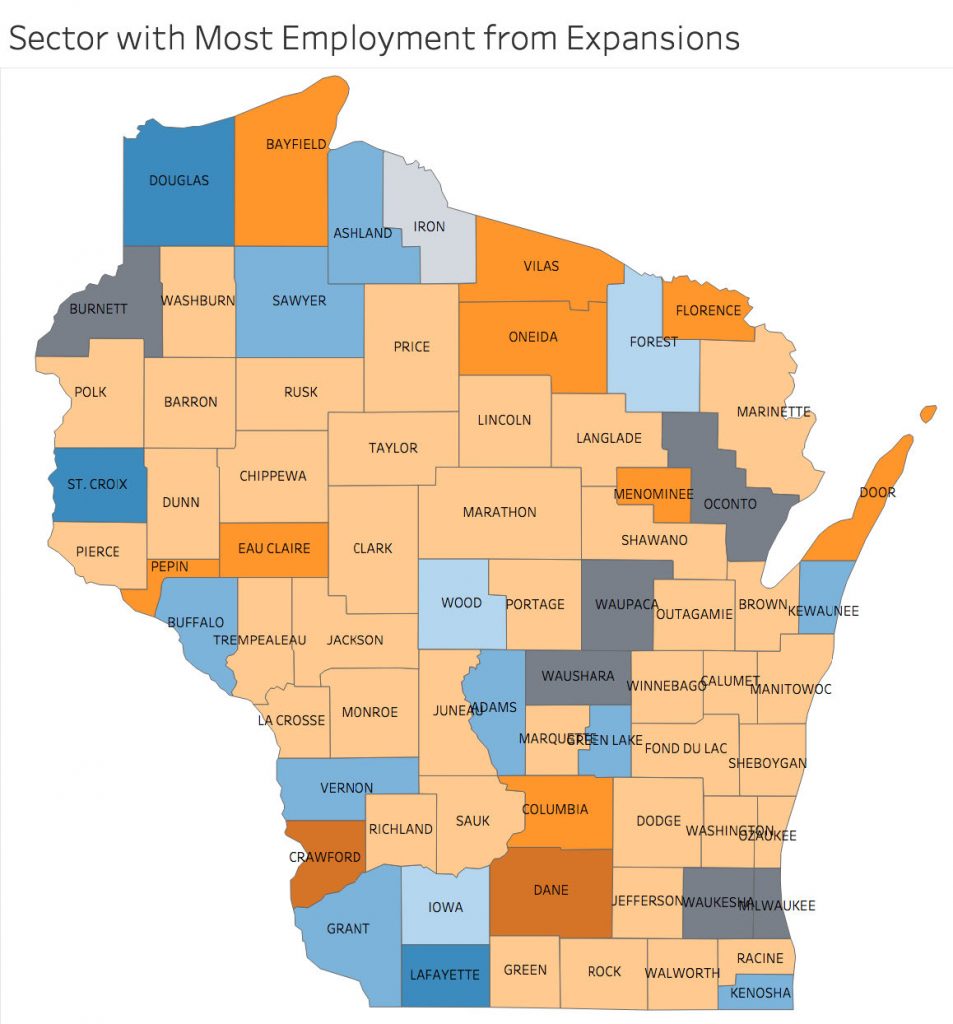 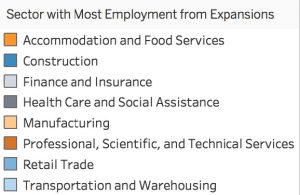 In addition to looking at expansions by sector, there are several other ways to think about expanding firms. There is reason to believe a large portion of job growth comes from small, fast-growing, young firms (often referred to as gazelles). In fact, some research indicates highgrowth firms account for as much as 50% of job creation (Decker et al., 2014). While age data is unavailable, we can break out expansions by size for the U.S. (Figure 7). Interestingly, with the exception of the largest category (firms with more than 1,000 employees), expansions are somewhat evenly distributed across establishment sizes. While this figure ignores jobs losses, it does suggest that firms of every size, and the largest firms in particular, are critical sources of job growth. 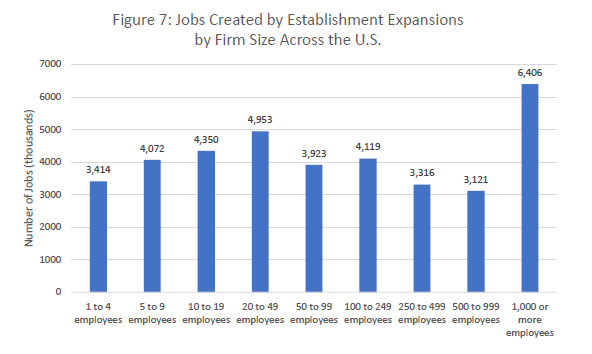 In Wisconsin, the vast majority of gross new jobs are created by expanding firms. In fact, compared to other states in the region, it ranks second only to Indiana in this measure. The strongest growth, not just in expansion rates, but in employment resulting from expansions is clearly in the more populous southeastern part of the state. Less clear, however, is exactly which industries are driving this growth. Across the state, hotels, restaurants, and retail establishments are responsible for the lion’s share of growing businesses, by total count. However, these firms generate a smaller share of employment due to their small relative size. In terms of jobs added per expansion, the manufacturing industry dominates all others.

Decker, Ryan, et al. “The role of entrepreneurship in US job creation and economic dynamism.” Journal of Economic Perspectives 28.3 (2014): 3-24.