The importance of small business development and entrepreneurship to the future health of the economy is becoming more widely understood and accepted across Wisconsin. Wisconsin focused research (Conroy and Deller 2015a) has documented that nearly all of the net job growth (expansions minus contractions) comes from start-up businesses, which tend to be small. Since 2005 in the total number of businesses in Wisconsin has largely stabilized and the small growth that is occurring is in the number of non-employee (i.e. sole proprietor) business. Conversely, the number of businesses with at least one paid employee has slightly declined compared to a decade ago. The policy interpretation of these simple trends points to the growing importance of self-employed Wisconsin entrepreneurs.

Not all business owners, however, approach their businesses in a uniform manner. In analysis of women business owners, as an example, researchers (Conroy and Deller 2015b and Deller, Conroy and Watson 2017) have found that women approach their businesses differently than men. In the simplest economic sense, women and men, on average, may have different “objective functions” when thinking about their respective businesses. The implication from a policy perspective is that care must be taken to understand that business owners are not “homogeneous economic agents” seeking to maximize profits at all times. Instead, personal factors and the context of the local network of business owners matters and is critical in creating strong social capital among small businesses. 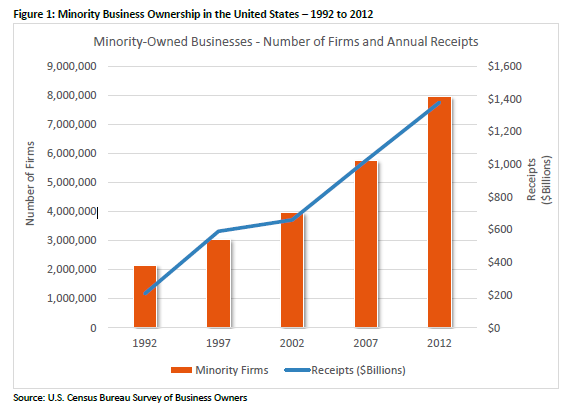 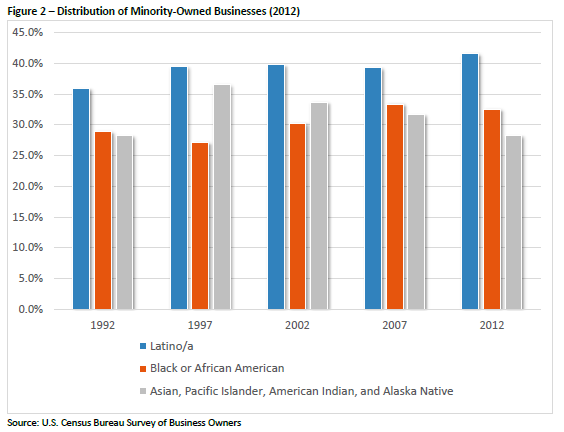 To better understand the role of minority-owned businesses in the Wisconsin economy, it is helpful to think about Wisconsin within a national context. In mapping the share of businesses that are minority-owned, there are clear concentrations in the lower quarter of the U.S. with other clusters found along the Atlantic coast (Figure 3). One can also find intensities in larger urban areas such as Atlanta, Chicago and Detroit. There are also a few prominent counties in the Great Plains that are likely associated with Native American business owners.

Compared to other parts of the U.S., the share of businesses that are minority-owned seems to be relatively modest in Wisconsin, and those businesses tend to be clustered in a handful of counties in southeastern Wisconsin. Similar to the U.S., minority-owned businesses tend to be smaller than their non-minority owned counterparts. But the absolute growth in the number of minority owned businesses over the past few decades suggest that the minority populations may be a fertile ground for the fostering of entrepreneurial activity. The challenge facing Wisconsin and local communities, is that many of current, and potential, minority business owners have unique social and business networks that are often independent of mainstream networks. The research on social capital and entrepreneurship is clear; the broader the business owner’s network (social and business) the more likely the business is to (1) start and (2) succeed. Parallel to the research on women business owners outlined above, a robust local business climate that fosters successful entrepreneurship must be inclusive to maximize those networks. Because minority business owners, much like women business owners, operate in smaller networks, attempts to broaden those networks is a necessary first step in building on the entrepreneurial potential of the growing minority population in Wisconsin.

²Note that the percentages total to more than 100.0% as some minority business owners identify with multiple races and ethnicities.

Conroy, T. and Deller, S. (2015a). Women business leaders across Wisconsin 1990-2011. University of Wisconsin-Madison/Extension, Patterns of Economic Growth and Development Study Series No. 2.

Conroy, T. and Deller, S. (2015b). Employment growth in Wisconsin: is it younger or older businesses, smaller or larger? University of Wisconsin-Madison/Extension, Patterns of Economic Growth and Series No. 3.