Between the end of WWII and the 1970s, a growing middle class narrowed the income gap. But over the past 30 years, economists have become increasingly aware of and concerned about rising income inequality. The causes and consequences of this trend have been the focus of countless academic studies, but rising income inequality has now received widespread public attention, as it has become a focal point of political elections. Moreover, the popular business media is beginning to express concerns about the long-term impact rising inequality may have on capitalist economies (Gensler, 2017). Although economists disagree on the potential direct impact rising inequality may have on the economy, there is growing consensus about increasingly severe political consequences. While there has been much discussion at the national and international level (Spence, 2016), for example the work of internationally-known economist Thomas Piketty, there has been less conversation about trends in Wisconsin. Using data from Mark Frank at Sam Houston State University and the U.S. Census Bureau, we provide a simple overview of income inequality in Wisconsin.

Several difficulties related to exploring income distribution trends arise from varying definitions and measurement. For example, how is income defined? Should one use total income, just income related to work, or pre- or post-tax income? How are income categories  defined and do we look at the patterns across all income categories or just those at the highest and lowest levels? 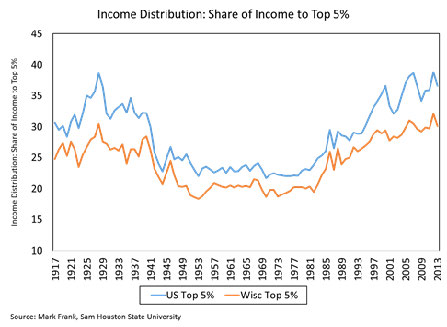 Economists have debated these “technical issues” and noted that these definitional questions can result in subtle changes to the analysis. Regardless, the overriding rise of income inequality cannot be refuted. For this brief overview, we consider the share of income going to the top five percent of the highest income households and the Gini Coefficient of income inequality.

Looking at long-term trends in these measures of income inequality for both the United States and Wisconsin reveals several patterns. With respect to the share of income going to the top 5% of households, the “Great U-Turn” which refers to decreasing then increasing income inequality, is clearly evident (Figure 1).¹ While the U-turn is also evident when analyzing the Gini Coefficient, it is less clear compared to the income-based measure (Figure 2). Nonetheless, it is evident that over the last 30 years, at a minimum, income inequality has been increasing. 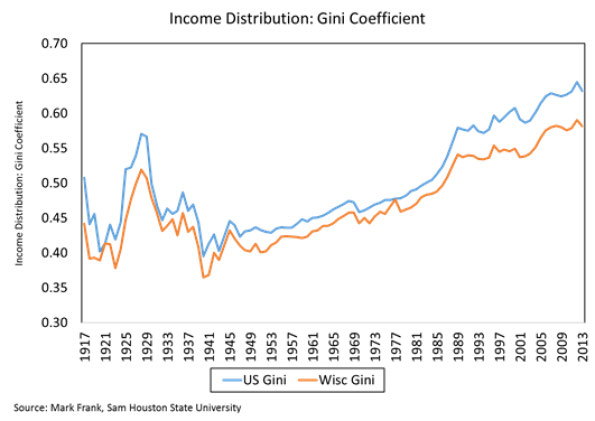 Wisconsin’s income distribution also closely follows national trends. This is not unexpected as Wisconsin’s economy generally tracks national patterns. The level of income inequality in Wisconsin, however, has historically been lower than the U.S. as a whole. In 2013, the income threshold to be considered in the top 5% was $168,144 for the United States and $149,750 for Wisconsin, a difference of $18,394. For comparison, to be in the top 1% the gap between the US ($398,318) and Wisconsin ($307,967) widens to $90,351.

The relatively low level of levels of income inequality in Wisconsin compared to the national average is apparent if we consider the spatial pattern of Gini Coefficients across the country (Figure 3). Mapping the most current Gini Coefficients, by county, from the U.S. Census Bureau we can see clear patterns in the spatial location of areas with both higher and lower levels of income inequality. Higher levels tend to be located in the southern states, parts of Appalachia, and pockets where shale oil and gas production has developed in the Dakotas. In large swaths of the U.S. heartland, including Wisconsin, income inequality tends to be lower. 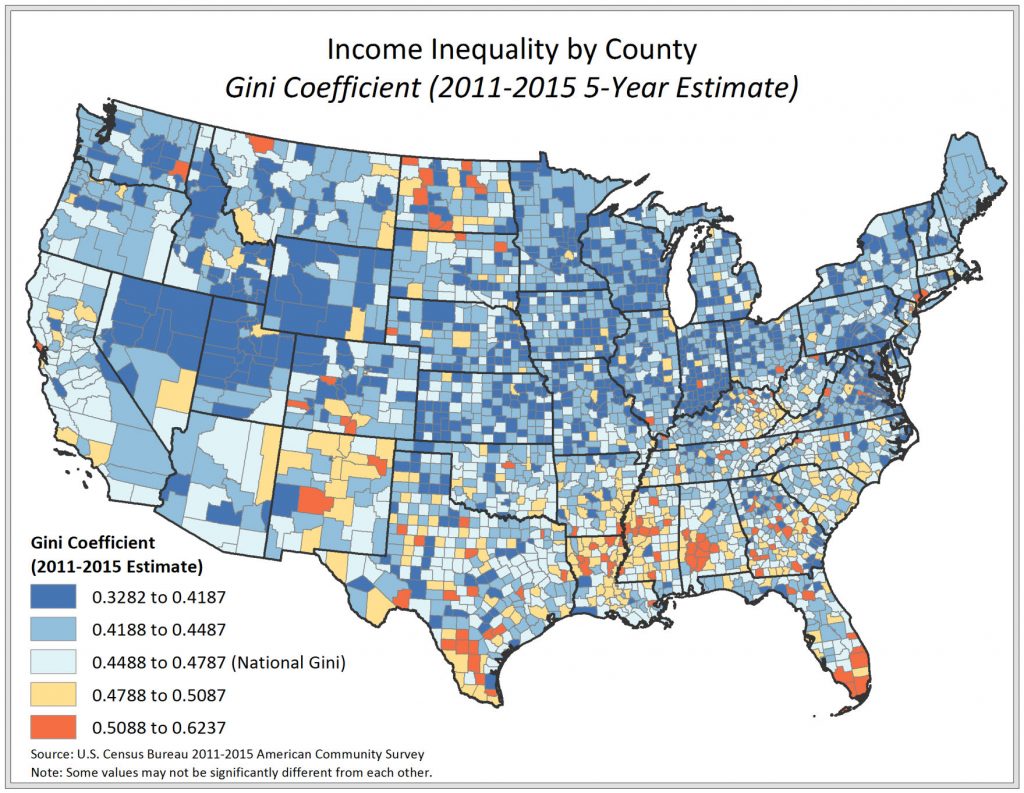 The pattern of income inequality within Wisconsin is less clear (Figure 4). Milwaukee and Ozaukee have high levels of income inequality, yet Washington County has a relatively equal income distribution. Also, high natural amenity counties, such as Ashland, Sawyer, Washburn, Burnett and Vilas have higher levels of inequality. This is likely due to the retirement migration of higher income households. Even so, Ozaukee County is the only Wisconsin county with a Gini Coefficient above the national value.

There are several possible explanations for the rise in income inequality. These include globalization and the “financialization” of developed economies, where professionals in the financial markets earn unusually high incomes. Another potential factor is skill-biased technological change (SBTC) where industrial restructuring and the introduction of new technologies results in higher returns to education along with a decline in jobs and wages for unskilled workers. Manufacturing, for example, has moved away from repetitive assembly using semi-skilled workers to computer-driven, robotic technologies that require higher levels of training and skill.

In addition, growth in the personal services industry, such as retail, restaurants and tourism among others, has created more low-paying jobs. Changes in national fiscal policies related to taxation and social support programs, including minimum wage laws, have also been offered as potential explanations.

Despite the wide range of explanations, no single line of thinking completely explains rising income inequality. Furthermore, what is a viable explanation for one region may not be applicable in another area. For example, the movement of higher income households into high amenity areas, often via retirement migration, does not fit neatly into any of these larger frameworks. In the end, each of these hypotheses offers one piece of a complex puzzle. 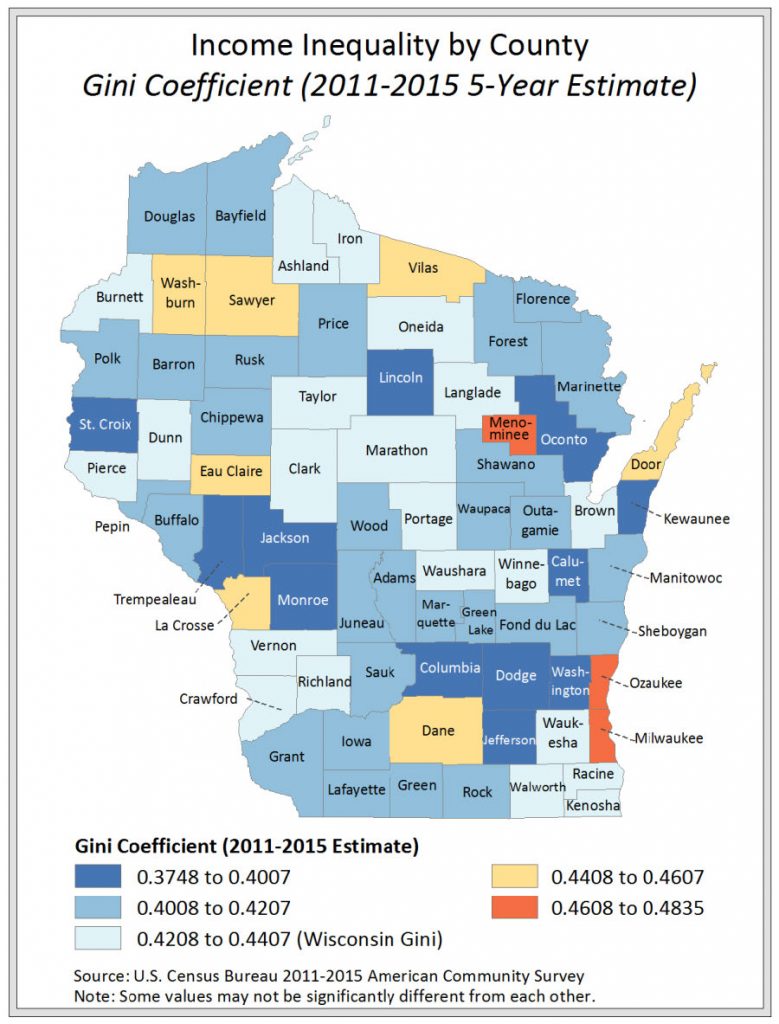 ¹See Alderson and Nielsen (2002) for more information on the “Great U-Turn.”