This rise in self-employment through nonemployer establishments is important as they are an entrepreneurial seedbed for the economy. These firms are potential sources of job creation—25% of nonemployer businesses plan to hire employees in the future (The Federal Reserve Bank of New York, 2019). At the very least, they create a job for the owners themselves. There is also evidence that these are more than small side businesses—63% of nonemployer establishments operate as the owner’s primary source of income (The Federal Reserve Bank of New York, 2019). Therefore, these businesses are important sources of income and future job growth.

While smaller in number and in size, the importance of minority-owned businesses to the economy is becoming increasingly evident. Citing diversity as an essential component to the nation’s economy, the U.S. Senate’s Committee on Small Business and Entrepreneurship described the significance of businesses owned by racial and ethnic minorities in the United States. They report that out of the 2 million businesses introduced to the nation’s economy over the past 10 years, minority entrepreneurs owned more than 50% (U.S. Senate Committee on Small Businesses and Entrepreneurship). In addition to contributing to the growth of businesses across the country, the report also states that these establishments created 4.7 million jobs during the same time period.

FIGURE 1: GROWTH RATE OF EMPLOYER AND NONEMPLOYER ESTBALISHMENTS IN WISCONSIN; 2010 – 2018 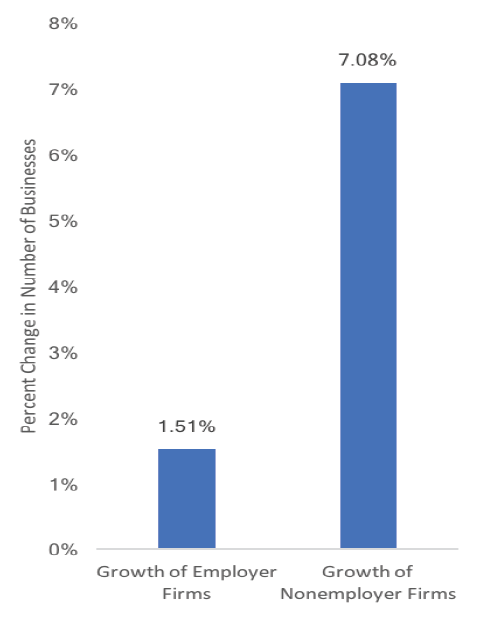 When we narrow the analysis to only Wisconsin, it is clear that the state’s trends of nonemployer growth tracks with the nation. As seen in Figure 1, the growth of nonemployer businesses between 2010 to 2018 was significantly higher than the growth of employer establishments over the same period. For instance, while the number of employer establishments increased by 2,112 businesses, 23,474 nonemployer firms were added to Wisconsin’s economy [6]. Thus, nonemployer businesses are essential to business growth in Wisconsin in the period after the Great Recession.

Population could be a key factor in explaining urban business growth. Specifically, urban counties are relatively more diverse than rural counties in Wisconsin. To the extent that people of color have a higher propensity for starting nonemployer businesses, larger populations of diverse residents in urban areas may explain the dramatic growth of nonemployer businesses. 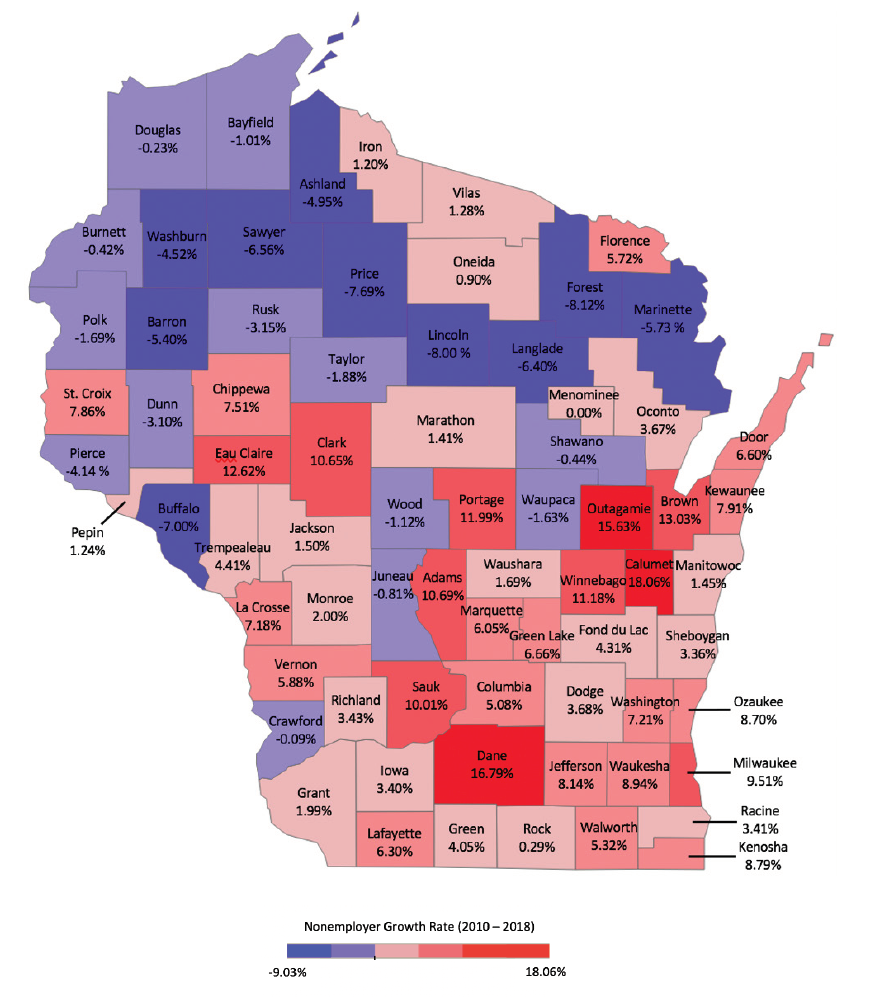 Indeed, looking by county, the more populous parts of the state have had more growth of nonemployer establishments as shown in Figure 3. The red hues indicate positive growth rates, or “hot spots” for nonemployer growth while the blue hues indicate negative growth rates. The counties with negative growth in blue are generally located in more rural areas, particularly northern Wisconsin.The southeastern counties generally had larger growth with Calumet, Dane, and Outagamie having the largest change—all three of which rank among the more diverse in the state.

To better understand the rise of nonemployers, we look at how the diversity of different counties relates to the growth of these establishments. First, we look at the overall racial and ethnic diversity for Wisconsin [7].

FIGURE 4: NONEMPLOYER GROWTH RATE AND HISPANIC AND NON-WHITE POPULATION FOR ALL WISCONSIN COUNTIES 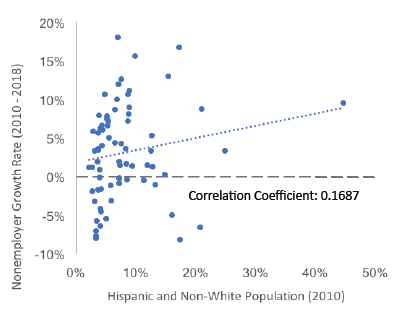 As seen in Figure 4, there is a positive relationship between the total non-white or Hispanic population of a county and its nonemployer growth [8] [9]. These results suggest that racial and ethnic diversity positively influences the growth of a county’s nonemployer establishments. Second, this relationship is unique to Wisconsin’s minority populations. When we consider the complementary relationship for the state’s nonminority population of non-Hispanic white residents, there is no positive effect. 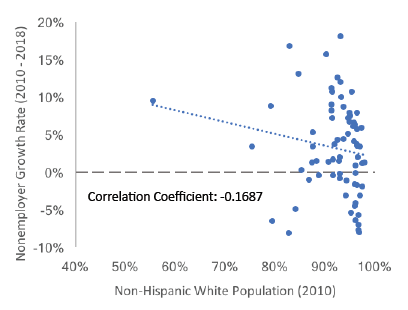 In fact, as presented in Figure 5, a larger non-Hispanic white population is associated with lower nonemployer business growth. In sum, these figures suggest a connection between the rise of nonemployer businesses and the area’s ethnic and racial diversity. 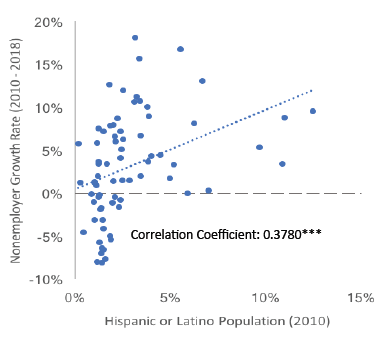 Given the positive relationship between the nonwhite population and the rise of nonemployers, we further disaggregate the diverse population to look at more specific racial and ethnic groups. We first consider ethnicity, namely the relationship between the Hispanic and Latino share of the population in a county and the nonemployer growth rate. Illustrated in Figure 6, there is a significant positive relationship between the two variables, which suggests that a county’s ethnic diversity specifically in terms of its Hispanic and Latino population positively influences the growth of the county’s nonemployer businesses. According to state-level data measuring the demographics and sector breakdown of nonemployers in Wisconsin, the largest sectors for Hispanic-owned nonemployer businesses are construction, transportation and warehousing, and other industries that offer a variety of services such as trade contractors, drivers of passenger vehicles or trucks, personal care and laundry services among others [10]. 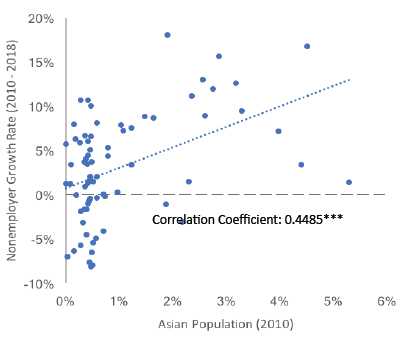 Next, we consider the largest racial groups in Wisconsin, specifically Asian, Black and African American, and American Indian. Starting with the share of a county’s population that is Asian American, in Figure 7, we show a significant positive relationship with the nonemployer growth rate. This result further suggests that the proportion of specifically Asian residents in a county positively impacts the county’s nonemployer growth. Similar to Hispanic-owned nonemployer firms, data about the largest sectors for Wisconsin’s Asian-owned nonemployers suggest that these businesses are likely to be in the transportation and warehousing sector as drivers of passenger vehicles and other sectors offering an assortment of services such as laundry and dry cleaning, personal care, legal assistance, consulting services, and computer systems support. 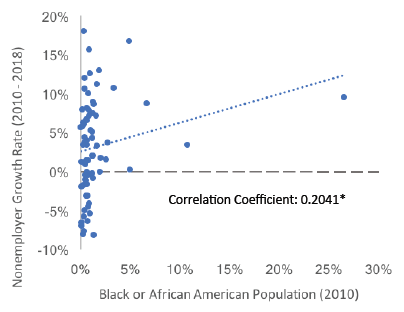 Next, we look at the Black and African American population of Wisconsin counties in relation to nonemployer growth rates. As seen in Figure 8, there is a significant positive relationship between the two variables, yet the point farthest to the right representing Milwaukee could be perceived as an outlier as it looks extreme compared to the other data. Milwaukee is distinct from the other counties since it has the highest Black and African American population by far at over 26% of the county. The large difference between Milwaukee and other counties in the state could mean that Milwaukee skews the results. Further analysis without Milwaukee yields another significant positive relationship, which although weaker, supports the initial result suggesting that the Black and African American population of a county positively impacts the nonemployer businesses of the area. The largest sectors for Black-owned nonemployer firms are transportation and warehousing and other service industries offering health care and social assistance services as well as personal and laundry services. Examples of nonemployers within these sectors are drivers of passenger vehicles, such as taxi or Uber drivers, firms offering ambulatory health care services, and individuals who provide social assistance services, like residential health aid or support for children and families. 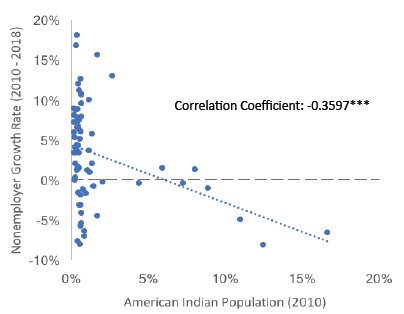 Lastly, we look at the relationship between a county’s population of American Indians of all tribes and its nonemployer growth rate [11]. In Wisconsin, less than 1% of the population identifies as American Indian alone. We find that there is generally a significant negative relationship between a county’s American Indian population and the county’s nonemployer growth rate as represented in Figure 9. State-level data about nonemployers shows that the largest sectors for American Indian-owned firms are construction, retail trade, and other services. These firms can look like self-employed individuals selling  their own products or contracting out their services, such as specialty trade construction, personal and laundry services, and professional and technical services like legal, computer systems, and design assistance.

This inverse relationship between the American Indian population highlights that while racial and ethnic diversity is generally associated with nonemployer growth there is important variation across racial and ethnic groups. It also draws attention to potential barriers and cultural differences that need to be considered when developing and supporting equitable paths to entrepreneurship. In a study focused on American Indian business owners in Wisconsin, there is evidence that exposure to entrepreneurship, business knowledge, educational attainment, tribal and government policies which give preference to American Indian businesses, the ability to take risks while facing the lack of capital, and supportive relationships between the owners and their families and communities all facilitate entrepreneurship (Erdmann 2016) [12].

In sum, these relationships and state-wide trends suggest a connection between the rise of nonemployer businesses and counties with larger populations of ethnically and racially diverse residents [13]. The significant positive relationships between an area’s diversity and nonemployer growth support the idea that minority entrepreneurship is critical for Wisconsin’s economy. Nonemployer businesses are an important source of income at least for the owners themselves and they can go on to create more jobs when they grow and hire employees, an especially important consideration as the growth of employer businesses seems to have stalled in Wisconsin.

Given that this analysis looked at the change over time for the period between 2010 and 2018, the impact of COVID-19 on nonemployer businesses are not accounted for in the analysis. It will be years before nonemployer data for 2020 are available. As the pandemic takes an economic toll on businesses across the country, particularly smaller establishments with less capital and those owned by people of color, Wisconsin’s nonemployers are vulnerable to the pandemic’s damaging effects (Conroy et al. 2020). Both now during the pandemic and as we recover, the success of nonemployer businesses is vital as they offer paths for Wisconsinites to contribute to the success of their communities’ economies, particularly in areas with higher non-white or Hispanic populations.

[3] Authors’ analysis of the Survey of Business Owners.

[4] The U.S. Census’ definition of minority are people who do not fall into the category of non-Hispanic white, which accounts for Hispanic, Black or African American, Asian, and American Indian groups.

[7] In this analysis, we used the 2010 5-year American Community Survey for information about the racial and ethnic demographics of Wisconsin’s counties. For each race, we used the estimate of those who identify only as “one race.” When we did the analysis with Wisconsinites who identify as multiple races, the results were not significantly different. In addition to the insubstantial change between the two analyses, 98.3% of Wisconsin residents identified as one race in 2010. Also, although race and ethnicity are not mutually exclusive categories, we used the estimate of Wisconsinites who identify as either Hispanic or non-white (or both) as our measurement of a county’s diversity.

[9] In Figures 4 and 5 there is some evidence of outliers, counties to the far left or far right that may drive the relationship. Supplemental analysis without these counties indicate that the relationships discussed still hold.

[12] In other literature addressing American Indian entrepreneurship, there is another theory that tribes hold more collectivist attitudes which would limit entrepreneurial pursuits as they are more individualist by nature. However, there is debate around the theory as some argue that it doesn’t address the long standing economic effects of European colonization nor does it account for differences among tribal communities and their separate values and ethics.

[13] Due to the change in methodology for the Census dataset which reports the demographics of business owners, we were unable to analyze the specific demographic changes of nonemployer ownership throughout Wisconsin between 2010 and 2018. Therefore, we cannot identify communities in a county which drove the growth of these small businesses from census data.

Erdmann, S. (2016, September). American Indian Entrepreneurs’ Perceptions of their Success in Establishing Businesses on or near Reservations in Wisconsin. Journal of Developmental Entrepreneurship, 21(3).