With unemployment rates at historical lows and many employers having difficulty finding workers to fill their open positions, policymakers and employers alike are looking for available labor. In Wisconsin, the labor force participation rate is already well above the national average. Given the age structure and historical trends identified by Kures, Deller, and Conroy 2018 , raising the labor force participation rate further may require careful evaluation of the current constraints on labor availability. These constraints on labor force participation may include training or education mismatches, a lack of transportation, health limitations, or having a criminal record. In addition, finding affordable, reliable, high-quality childcare can be essential for working parents.

Women’s work choices, in particular, seem to be acutely impacted by the responsibility of childrearing and securing childcare (Conroy 2018; Bivens et al. 2016).

Figure 1: Prime Age Female Labor Force Participation Rate and Children per Prime Age Female (Wisconsin Counties)
While many women prefer to leave the labor force so they can provide full-time care, there may be a subset of women that would prefer to work some amount but the limitations of finding high-quality childcare keep them from doing so.

While women do seem to be particularly affected by children and childcare, this issue affects entire households. As gender roles are shifting, father figures are likely also sensitive to the issue of childcare in their work choices. Yet this for males appears to be subtler. In Figure 2 we show the correlation between prime age (25-54 years old) male labor force participation and children under age five per male. The figure indicates a slightly positive relationship; as the presence of young children increases, males join the labor force. Taken together, Figures 1 and 2 suggest that, in Wisconsin, many households may be structured with a male breadwinner and female childcare provider. In fact, in every state, mothers of children under age six are less likely than fathers to be in the labor force (IWPR, 2015).

Of course, it is unlikely that all 72,000 of these “missing female workers” would choose to work more given a desirable childcare option, but it does suggest that there is a relatively large pool of workers to consider. Further, this pool of female workers is likely relatively well-educated given that a larger share of women than men hold a bachelor’s degree in Wisconsin’s younger cohorts (Conroy, Kures, and Deller, 2017). Recent research shows that while young children have a negative effect on regional labor force participation for women, childcare availability has an offsetting positive effect on both female labor force participation and female entrepreneurship (Conroy 2018). If even a fraction of the women who are not in the labor force are affected by childcare, it may be worth policymakers, community leaders, and employers considering the local childcare offerings.

In Wisconsin, there are roughly 6,300 childcare providers including both larger childcare establishments that have at least one employee (25% of providers) and smaller sole provider entities that have no employees, also called “nonemployers” (75% of providers). The availability of these providers does vary substantially across the state. Figure 4 shows the number of children under age five per childcare establishment in each county. As evidenced by the number of children in each county per childcare provider, childcare needs likely well exceed current availability of formal childcare centers in many areas, especially where the majority of providers are small scale individual providers. Families must then rely on their networks and informal arrangements, not included in the graphic, for childcare services. While many such arrangements can be great to support working parents, the lack of formal childcare centers could still be a constraint on families. The Institute for Women’s Policy Research conducted a study of child care for the entire U.S. and found that while childcare varies greatly across the U.S., all states under-provide care for children under age five based on cost, enrollment, and policies to support pre- kindergarten care (IWPR, 2015). 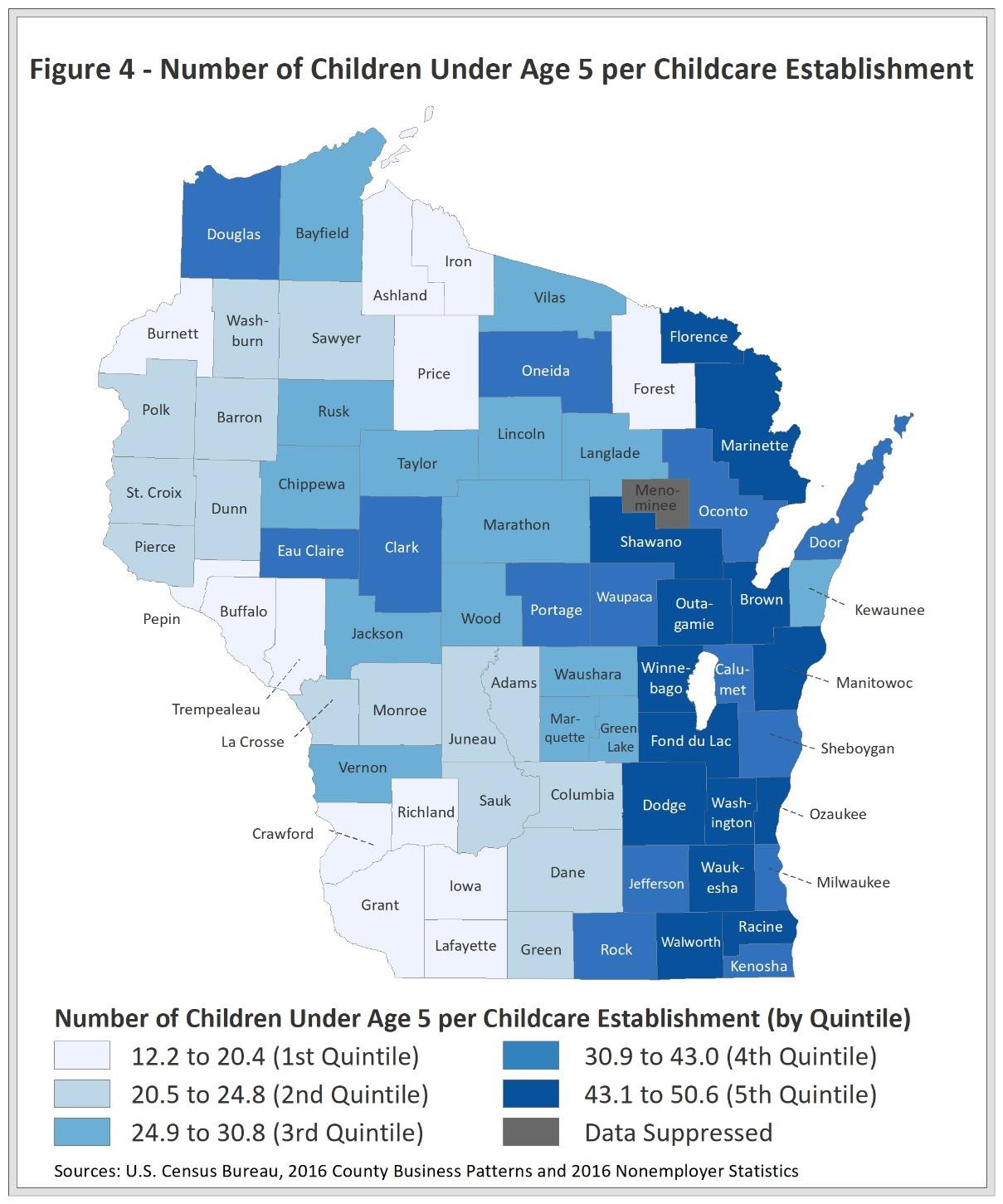 Even if childcare is available, it can be cost prohibitive. One estimate of childcare cost indicates that, in Wisconsin, childcare for a four-year old is between $8,000 and $9,500 annually (“Child Care in State Economies”, 2015), equal to $660-$800 per month. Another study by United Way estimates that childcare in Wisconsin costs $1,231 dollars per month for a family of four with an infant and preschool-age child operating on a bare-minimum budget in 2016 (ALICE, 2018). For a family earning the median household income for Wisconsin of $56,811 in 2016, these estimates suggest that childcare can be in the range of 14-26% of their monthly gross income. By county, estimates of the cost of childcare for a family of two adults, one infant, and one preschool-age child operating on a bare-minimum or “survival” budget are shown in Figure 5 (ALICE, 2018). These estimates may be high in that having an infant or more than one child will increase costs, however, they are conservative in the sense that these reflect a household facing a relatively constrained budget.

Though not costless or easy to address, support for affordable, stable, high-quality childcare options has potential to generate many benefits that go beyond increasing the labor supply:

While we are best able to measure the quantity or availability of childcare in the state, the number of providers is just one dimension of the issue. The most successful approaches to childcare will also incorporate quality and cost. Quality is essential for generating the childhood development benefits. Cost must be addressed so that families, many of whom have not seen real wage increases in decades, can afford this care (DeSilver 2018). The multifaceted nature of childcare means support and solutions will likely benefit from comprehensive approaches that incorporate workers, employers, and local leaders.

Already communities in Wisconsin are developing innovative solutions to childcare. In Vernon County on the western edge of Wisconsin just south of La Crosse, Organic Valley and Vernon  Memorial Healthcare with several other employers have come together to create a shared services network (Kirwin 2018). With grant support from the Medical College of Wisconsin, they have created a system for shared services and shared costs that helps keep childcare providers in business. They also have plans for a community supported relief squad that will provide backup staff in the event providers are unable to provide services. Such an initiative demonstrates how different players can collaboratively support stronger childcare at the community level and serve as one example for communities interested in working on this issue.