Economists have long known that entrepreneurship in the form of business start-ups is vital to a vibrant and strong economy (Conroy and Deller, 2015). Wisconsin, however, tends to compare unfavorably to other states in terms of entrepreneurship. The Kauffman Foundation has been monitoring entrepreneurial activity for a number of years and their most current analysis places Wisconsin last in among large states in startup activity for the third year in a row. In fact, some have suggested that the slow pace at which the Wisconsin economy recovered from the Great Recession can be explained by the low rate of new business activity.

The potential connections between population dynamics and entrepreneurial activity are interesting when considering how Wisconsin’s population has changed over time. For instance, Wisconsin has traditionally lagged the nation in terms of population growth over the past several decades. The low growth rate is partially due to Wisconsin’s migration patterns, which suggest that the state has some of the lowest rates of population churn (gross migration) in the United States (Kures 2017). Similarly, Wisconsin’s out-migration rate of working age college graduates is one of the lowest in the United States; while its in-migration rate is even lower (Conroy, Kures and Deller, 2016).

To gain basic insights into whether population change might influence entrepreneurial activity, we look for patterns in the most current Kauffman Index of Startup Activity¹ for the 50 states across four simple measures of population dynamics: 1) total population change, 2) net migration, 3) the percent a state’s residents that were born in the state, and 4) the percent of the population that was born in a foreign country. If entrepreneurship is a reflection of the dynamism of an economy, we would expect to see states with high levels of entrepreneurial activity also have greater levels of population growth, net in-migration and a share of population born outside the state. As suggested earlier, the logic is straightforward: the introduction of new people, whether they are migrants from other states or other countries, brings new ideas and different ways of doing things. These new ideas subsequently bring innovation and entrepreneurship into the state. While that is the theory, what do the data tell us?

A simple scatterplot of the Kauffman Index of Startup Activity (on the horizontal or bottom axis) and state population growth rates between 2000 and 2016 reveals a strong positive relationship (Figure 1). 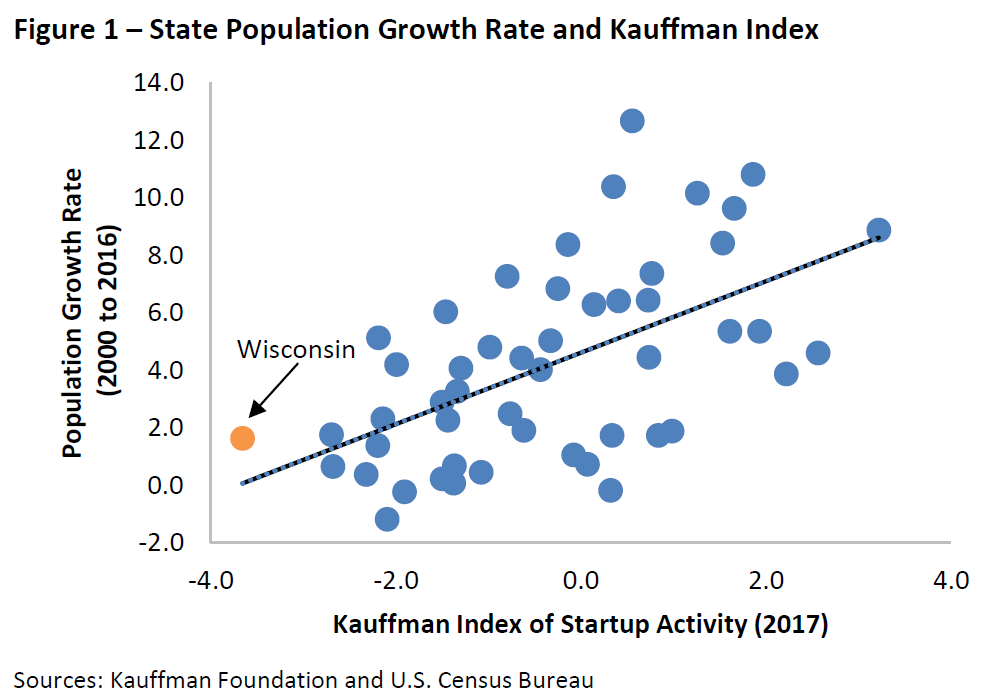 A simple scatterplot of the Kauffman Index of Entrepreneurship and net migration rates (2014-2015, the most current available) also reveals a strong positive relationship (Figure 2). 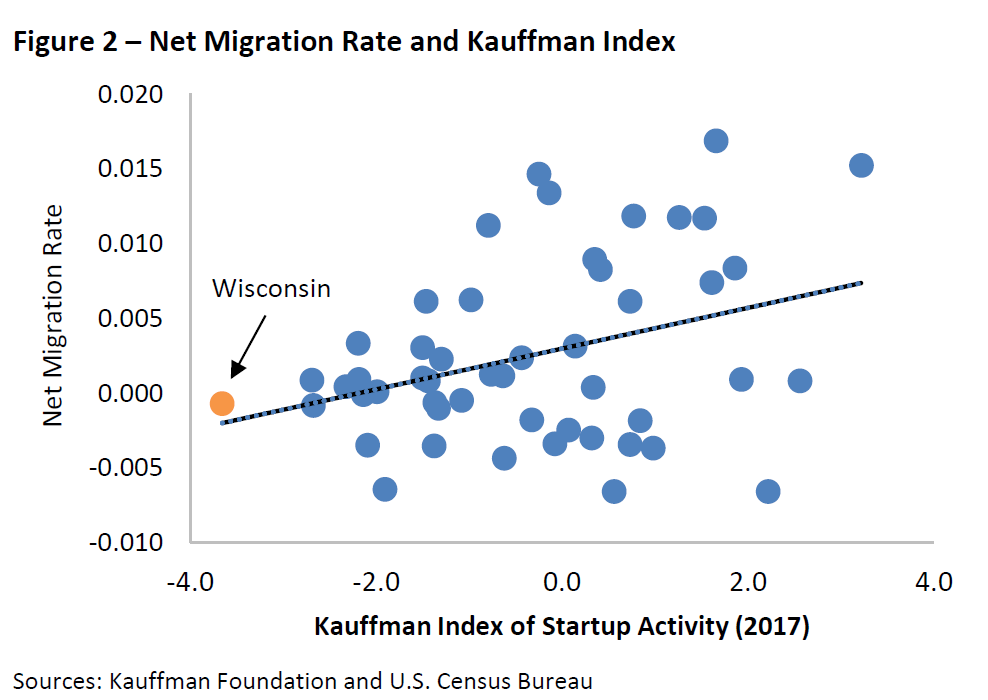 Another way to consider population dynamism is the share of a state’s population that was born within the state. The share of a state’s residents who were also born there provides a perspective on how in and out migration has shaped a state’s population over a greater time period. A simple scatterplot again reveals that states with a higher percent of the population born in the state have lower levels of startup activity (Figure 3). Wisconsin ranks fifth in the nation in terms of the highest percent of the population born in the state at 71.6% compared to a national average of 58.1%. Only Louisiana, Michigan, Ohio and Pennsylvania have higher shares than Wisconsin. 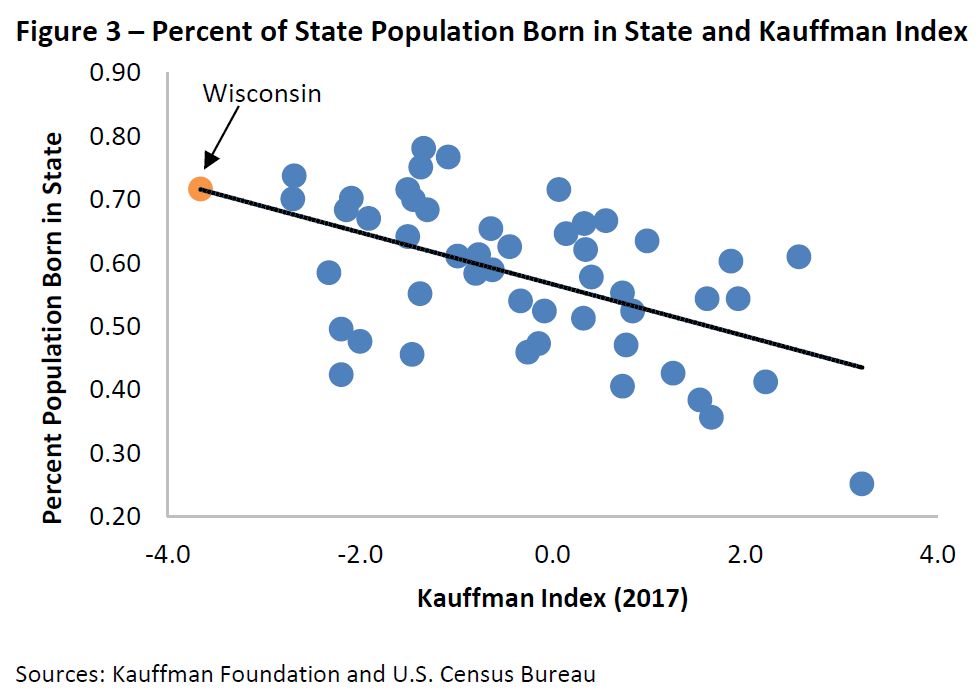 Our final measure of dynamism is the share of the state population that is foreign born. Within the economics literature, the evidence strongly suggests that higher levels of international migration are linked to higher levels of entrepreneurship (Vandor and Franke, 2016). For example, estimates suggest that immigrants represent 27.5% of all U.S. entrepreneurs but only 13% of the population. The scatterplot of the percent of each state’s population that is foreign born and the Kauffman Index of Startup Activity supports the general consensus in the economics literature (Figure 4). Here Wisconsin ranks 35th nationally with only 4.8% of the population foreign born. 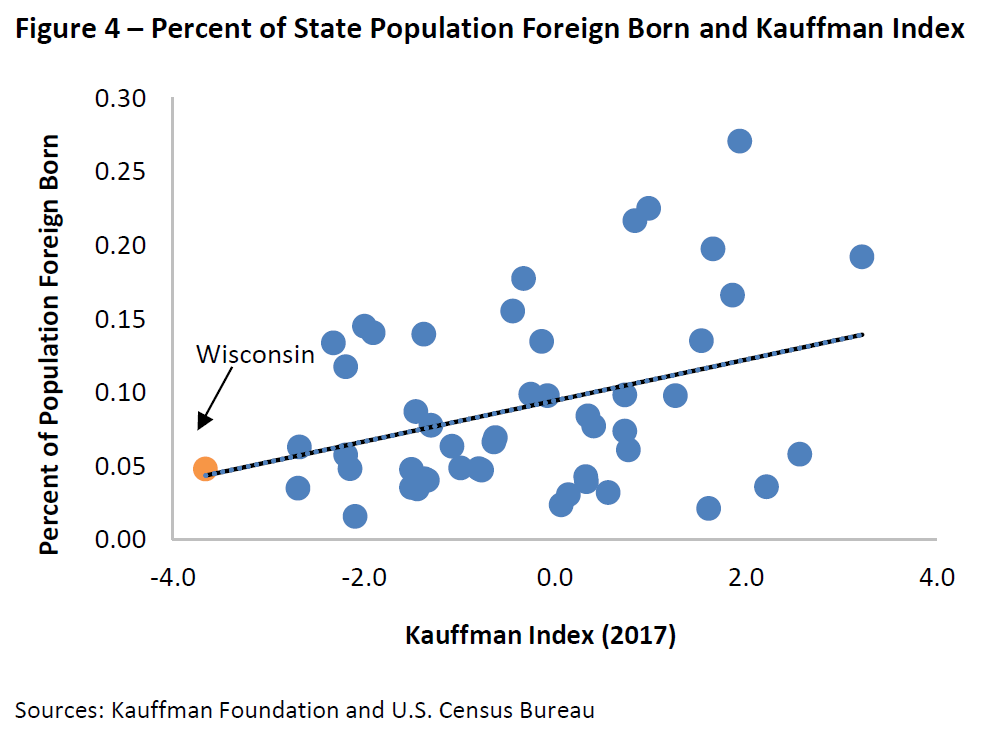 The logic behind a more diverse population, through simple migration, and higher levels of entrepreneurship hinges in the introduction of new ideas into an existing market. By living in different regions (states or countries) people are exposed to different products and services along with alternative ways of conducting business. Through migration they bring those ideas to their destinations also in the form of knowledge transfer. It could also be the case that people who are willing to relocate, particularly from a foreign country, are willing to take on risk which can help foster a more entrepreneurial environment. An alternative way to view the analysis is that entrepreneurial regions are more attractive to migrants and accepting of those migrants. Regions that are open to new people, particularly international immigrants, and new ideas tend to be inherently more entrepreneurial.

Conroy, T. and Deller, S. (2015). Employment growth in Wisconsin: is it younger or older businesses, smaller or larger? Patterns of Economic Growth and Development Study Series No. 3, Department of Agricultural and Applied Economics and Center for Community and Economic Development University of Wisconsin-Madison/Extension.