The relationship between the diversity of a regional economy and economic growth, stability, and resiliency has been at the center of a large academic literature for over 70 years. Drawing on the idea that a diversified portfolio of investments (e.g. stocks, bonds, etc.) can minimize risk and foster sustainable returns (growth) many economists (Rodgers 1957; Parr 1968; Nourse 1968; Richardson 1969; Conroy 1972; Kort 1979) promoted the idea that as a region’s economy becomes more diversified, it becomes less sensitive to fluctuations caused by factors outside the region. This led to the “conventional wisdom” amongst policymakers that promoting a diversified economy leads not only to stability and resilience (the ability to rebound after a shock), but also entails the broader goals of growth and lower unemployment levels. 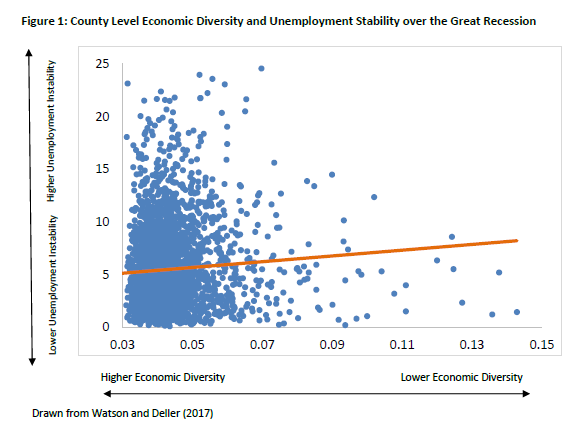 Basic economic theory, however, also suggests that growth should be derived from economic specialization, with regions focusing on areas where they have a comparative advantage (the ability to more efficiently produce a good or service compared to other regions). For example, due to its climate, geography, natural resources, and location relative to major Midwestern cities, Wisconsin has a comparative advantage in dairy and tourism/recreation, relative to most other states in the region. Comparative advantage can also lead to specialized economic clusters (geographically concentrated, interconnected businesses that provide positive, within-cluster externalities, leading to self-perpetuating growth). Tourism and recreation in the Wisconsin Dells area and software development in and around Madison are two examples of economic clusters.

Building on the same research that generated Figure 1, the relationship between economic diversity in 2005 and employment growth from 2010-2017 is presented in Figure 2. Not surprisingly, counties with higher levels of economic diversity experienced lower levels of employment growth compared to counties with lower economic diversity (specialized economies). As expected, regions that have concentrations in particular industries can benefit from the growth potential associated with economic clusters. Given the contradictory nature of the simple evidence presented in the two scatter plots (Figures 1 and 2), it appears economic theory dictates policymakers are forced to choose between the mutually exclusive goals of growth or stability. This is a choice most, if not all, policymakers are unwilling to accept or act upon when designing policies.
Thus far, the number of businesses has been utilized as the measure of economic diversity. An alternative measure, employment across industries (defined by their three-digit NAICS code), is used to generate the state diversification rankings in Figure 3. Data from 2017 (most recent available) is used and the Herfindahl Index is again calculated for each county in the U.S. As can be seen by this measure of diversity, Wisconsin ranks as the state with the most economically diverse employment in the country. A geographic representation of this data is presented in Map 1. 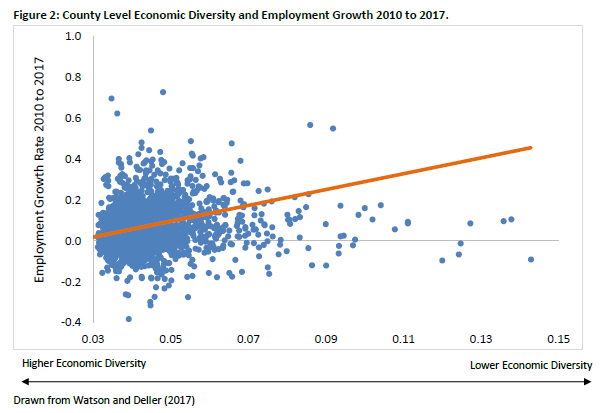 Given the dependence of states like Nevada and Florida on gaming and tourism, respectively, it is not surprising that they are among the least economically diversified states, as measured by the distribution in employment across industries. It is also worth noting that these were two of the states hit hardest by the Great Recession: people tend to curtail entertainment and recreational spending first in response to lost employment, decreased income or uncertainty about future employment and income. It is also not surprising to see Wyoming near the top of this list, as it is fairly specialized in the areas of mining and energy related activities. In these states, it appears that the dependence on a small handful of industries, such as gaming, tourism, or mining, exposes the larger economy to economic shocks beyond its control, specifically, the within industry “boom and bust” cycles of rapid growth followed by sharp decline. 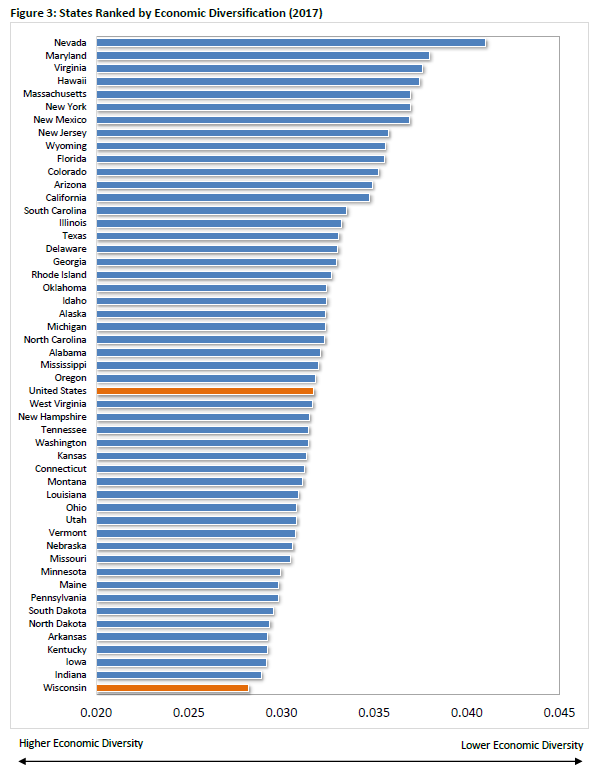 It is also worth noting that states with more diverse economies (Wisconsin, Indiana, Minnesota, Pennsylvania, etc.) tend to exhibit higher levels of economic stability but also have more modest growth rates. While Wisconsin was negatively affected by the Great Recession, it did not suffer the “bust” style decline experienced by more specialized states. Similarly, the level of economic diversity may also explain why Wisconsin was slower to rebound than other states in the wake of the financial crisis. Coupled with this empirical evidence, the above discussion of the theory behind economic growth suggests the Wisconsin economy is likely to be more stable but experience slower growth rates into the future. Figure 4 lends further credence to this assumption. The state has been the most diverse in the region for two decades and appears poised to remain in that position for some time to come. 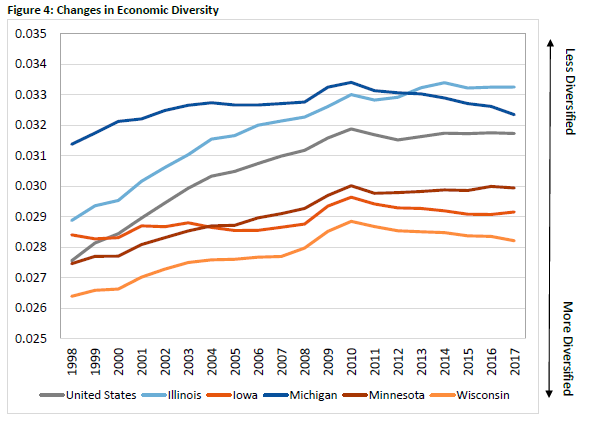 By all appearances, Wisconsin policymakers have pursued policy pathways focused more on stability than growth. For example, Wisconsin has identified and attempted to support several potential economic clusters (specializations), including advanced manufacturing, aerospace and aviation, bioscience, energy, power and control, food and beverage processing, water technology, and forest products, among others, that are sufficiently distinct enough to be seen as a strategy of economic diversification.

Some of the academic and policy literature suggests this tradeoff between growth and stability or growth and resiliency may be unnecessary (Wagner and Deller, 1998; Malizia and Ke, 1993). This line of research indicates that growth, stability, and resiliency are not contradictory when viewed in terms of the short-run and long-run. Short-run policy can be thought of as growth oriented, with policies targeting high-growth industries. These strategies capitalize on a specific region’s comparative advantage by focusing on a few select industries. In many cases, the targeted industries have formed economic clusters. One could make the case that Wisconsin, in its approach of focusing on about ten separate and independent clusters is pursuing this balance of short- and long-term thinking.

Focusing solely on the short-run can lead to the “job is done” trap, whereby policymakers enact growth policies then turn their attention elsewhere, assuming economic growth is inevitable. This can be dangerous for several reasons. First, as industries mature, they face different constraints which must be addressed by different policies in order to sustain growth. Second, if the targeted industries weaken or fail, the entire region may end up worse off than prior to implementation of the growth policies. In Wisconsin, recent examples of policy focused on short-run growth are those directed toward frac sand mining. While short-term “booms” can appear attractive to investors and politicians, research suggests that most communities are left worse off after the “bust” occurs.

It is recommended that policymakers pursue short-run strategies within the long-run framework of diversification. Diversification policies should be viewed as the long-run envelope of a region’s short-run efforts. In this sense, long-run policy can be seen as promoting stability, resiliency, and growth. As stability and diversity increase, so should the potential for growth. In structuring such policies, it is important to think of diversity not as the absence of specialization, but as the presence of multiple specializations (Malizia and Ke, 1993).

The apparently contradictory goals of growth and stability can be pursued simultaneously and consistently. Consider a region whose true comparative advantage is agriculture. Short-term growth strategies may be to establish a production agricultural base in select commodities. Over time, additional strategies may evolve toward expanding the regions commodity base, introducing value-added processing, and tightening linkages among the regions industries by reducing imported inputs. Such a strategy will enhance the region’s ability to capture economic benefits from the gains of trade with final products as opposed to raw or intermediate products. The short-run strategies focus on growth, but the long-run envelope moves the economy toward diversity.

In summary, policymakers do not need to choose between growth and stability when crafting an economic growth strategy. These distinctions are simply a matter of context. Short-term economic growth can be facilitated through policies directed at specific industries that have a comparative advantage. Encompassing such strategies in a longer-run framework directed toward increasing economic diversity can provide sustained, robust economic growth, a desirable outcome for every policymaker.

A special thanks is expressed to Tessa Conroy and Matt Kures who provided helpful comments and suggestions. Any errors are the responsibility of the authors.

¹The Herfindahl Index is perhaps most widely known in anti-trust law enforcement because of its use by the U.S. Department of Justice in determining the level to which a small handful of firms dominate a particular industry.

Watson, P. and S.C. Deller. (2017). “Economic Diversity, Unemployment and the Great Recession.” The Quarterly Review of Economics and Finance. 64: 1